Born in Kiev, Ukraine, Aliya AKBERGENOVA started piano lessons at the age of six. Her love for music, audience and public performances brought her to the R.M. Gliere High School of Music in Kiev, and after that to the Tchaikovsky National Music Academy of Ukraine where she studied with Natalia Gridneva. After graduating in 2007, Ms. AKBERGENOVA decided to stay at the Tchaikovsky Academy, where she enrolled into an Assistant course, combining it with a recently obtained position of a Piano Instructor at the M.V. Lysenko Specialized Musical School for Gifted Children in Kiev. During that time, she performed extensively in solo and chamber concerts throughout the Ukraine, as well as abroad. She soloed with the Presidential Orchestra of Ukraine, the Lviv Virtuoso Chamber Orchestra, and the Symphony Orchestras of Kiev, Lviv, Chernigiv and Chernivtsi, to name a few. She was invited to perform at such music festivals as the Kyiv-Music-Fest, Premiers of Season (Ukraine), and the Summit Music Festival in New York, USA, where she became a prize winner of the XV Summit Music Festival Concerto Competition in 2005. She also participated in the Master Classes of the Hamamatsu International Piano Academy in 2006 and 2008. Ms. AKBERGENOVA was a scholarship winner of the Ukrainian Presidential Foundation for the Advancement of Talented Youths, and earned special grants on multiple occasions.
In 2010, Aliya AKBERGENOVA moved to Austria to continue her musical studies with Milana Chernyavska at the University of Music and Performing Arts in Graz. She is also studying song interpretation with professor Joseph Breinl and chamber music with Pr. Chia Chou.
In 2012 she was the all-around winner of the Vietrisul Mare-Amalfi Coast International Piano competition in Salerno, Italy (1st prize and Premio Assoluto Vincenzo Solimene), the 1st prize winner of the Grand Prix International in Montrond les Bains, France and the 2nd prize winner at the Martha Debelli scholarship competition in Graz.
Acclaimed for the outstanding elegance in piano playing, Aliya AKBERGENOVA is now studying with renown pianist Elisabeth Leonskaja.

No concert schedulded for now 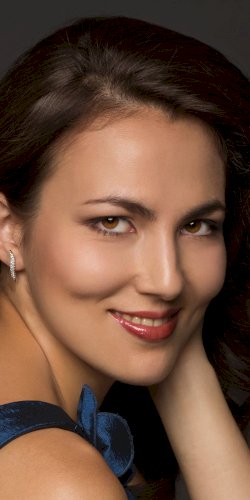