Philippe de CHALENDAR, conductor
"Frame your mind to mirth and merriment which bars a thousand harms and lengthens life."     William Shakespeare William Shakespeare - The Taming of the shrew. Act1 Sc2
Philippe de Chalendar started his musical carreer with piano and cello. He played in the orchestra of the Schleswig Holstein Festival under Sergiu Celibidache and Leonard Bernstein. Supported by his masters, he went on the path of conducting and analyse at the Conservatoire national de musique de Paris and followed many masterclasses in Sienna, Hilversum, Bartók Festival, Tanglewood...
In 1989, Philippe de Chalendar won the Special Jury Prize at the International Competition of Conductors of Besançon, the true starting point of his career. He then directed many prestigious orchestras. His successfull debut with orchestra of Nancy in the Orchestral Suite of Bartok's Marvelous Mandarin is followed the same year by the Philharmonic Orchestra of Radio-France. He conducted also the Orchester National de France. He is also invited to conduct the Orchestra of the Pays de la Loire, the Auvergne Chamber Orchestra, the Pasdeloup and Lamoureux Orchestras and orchestral ensembles in Poland, Romania and Hungary.
Between 1993 and 2001, Philippe de Chalendar was the James Conlon's assistant at the Metropolitan Opera in New York and Philharmonie of Cologne. In 1996, he was appointed assistant conductor at the Opéra National de Paris for productions alongside such prestigious conductors as Gary Bertini, Jeffrey Tate and Edo de Waart (La Bohème, Rigoletto, Don Giovanni, Don Carlo, Der Zwerg, The Child and the Spells, Falstaff, Parsifal, Turandot, Contes d'Hoffmann, Der Fliegende Hollander, Manon, Eugene Onegine, War and peace, Don Quichote, Nabucco, Der Rosenkavalier and Wozzeck). Between 2008 and 2010, he worked again with James Conlon at the Los Angeles Opera on the productions of Othello, Les Oiseaux and Les Stigmatisés.
Philippe de Chalendar made his debut at the Opéra de Marseille in La Veuve Joyeuse. He then directed Rigoletto at the Dusseldorf opera, Hansel and Gretel at the Nuremberg Opera, L'Enlèvement au Sérail at the Bonn opera and regularly at the opera Debrecen, Hungary: The Magic Flute, Carmen, Idomeneo, Pagliacci, Cavalleria Rusticana.
In 2001, he settled in Hungary, which became his second homeland. He conducts more than ten orchestras in Budapest and throughout the country. In addition, Philippe de Chalendar organizes and conducts tours in France with the Savaria orchestra (Bartók’s Concerto for Orchestra and Dvorak’s Cello Concerto and in the United States with the orchestra of Pecs.
Philippe de Chalendar was Music Director of the National Theaters of Miskolc and Debrecen, Hungary. His interpretation of Adriana Lecouvreur in 2008 for the Mezzo TV Festival with the Szeged Opera was unanimously acclaimed by critics and audience.
In 2011, he made his debut with the Nice Philharmonic Orchestra and was immediately re-invited by the Festival d'Art sacré of Paris. In 2012, he conducted the opening concert of the Antibes Festival with the Cannes-Provence-Alpes-Cote d'Azur orchestra and, in 2013, he conducted La Vie Parisienne at the Nice Opera.
Praised for its high precision and attention to musical detail by contemporary composers, Philippe de Chalendar led the Ensemble Itinéraire (concerts at the Pompidou Center, Freiburg, Madrid and Rome) for two years. In Hungary, he has conducted the works of the Hungarian composers Orban, Selmeczi and Dubrovay.
Philippe de Chalendar has recorded many CDs for Hungaroton label: La Symphone Fantastique by Berlioz with the Budapest Symphony Orchestra, Dvorak's Cello Concerto with Dominique de Williencourt and The Savaria Orchestra, Schumann's Piano Concerto with Suzanne Ramon and the Budapest Symphony Orchestra, Dubrovay's 1956 and Trumpet Concerto with the Hungarian Radio Orchestra, Bach Concertos in F minor and with Hsin Ni Liu, a program of contemporary Spanish and Italian music.
Philippe de Chalendar has thrilled the Parisian audience in 2017. With Orchestre Lamoureux and soloist Anna Fedorova, he has conducted Rimski Korsakov's Shéhérazade and the 2nd Piano Concerto by Rachmaninov. The concert was a tremendous success in a sold out Theatre des Champs-Elysées. Recently, he has conducted several concerts in Shanghai and Xiamen, in China. In 2020, he has conducted a new production of Don Carlo by Verdi in the italian version in 4 acts. 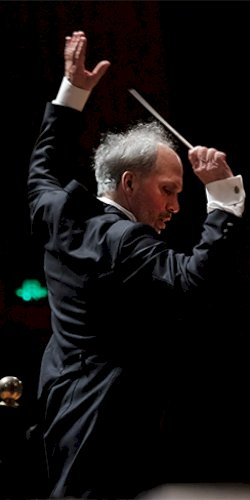